Stick with the Herd? 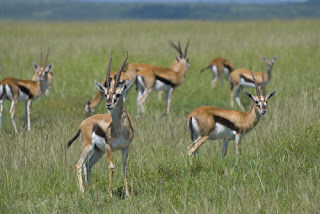 Knowing is not enough.  We must apply.
-Johann Wolfgang von Goethe
My daily commute to work takes me through the hills of western Pennsylvania.  It takes me 40 minutes to make the trip so I've really come to love podcast and audio based education.  Mel Herbert and the crew at EMRAP do a great job of putting on a quality show.
Recently, the crew recorded a debate between Mel and Billy Mallon about the Ottawa Aggressive Protocol for Atrial Fibrillation.   During his rant, Dr, Mallon makes some important criticisms of the protocol.  If he had stuck with his numbers, he would have made a convincing argument against the protocol.  But then, he blunders.  As an educator, he makes a statement to his residents and students that I see as irresponsible of an educator.
It goes as follows:
"My top 10 reasons for not doing this are: 1. Most don't.  And just as an idea in medicine and a concept: stay within the herd.  If you want to know what the problems are of not being in the herd, turn on the nature channel.  The gazelles that are not in the herd, are lion food.  Okay?  Stay with the herd!  The herd doesn't do this."
Really?  REALLY?  An idea and concept?  That's the number 1 reason?  Do what everyone else does?  That sounds more like lawyer speak than physician speak.  Almost like when I overheard a fellow faculty member tell a resident to get ankle x-rays on a Ottawa negative patient "because this isn't Canada; Canadians don't get sued."
The "go with the herd" mentality is a dangerous preposition in medicine.  Medical history is filled with vivid examples of how patients were harmed because the this mentality.  Virchow, the leading authority in his time, was particularly critical of Ignaz Semmelweis and his data to suggest that physicians could cut disease rates by simply washing their hands.  Who knows how many lives were lost due to the fact that physicians were "gentlemen" and felt that they didn't need to wash their hands.  160 years later, we're still dealing with the fallout.
Why is it that interventions known to be effective take so long to put into practice.  Herd mentality.  If nobody else does it why should I?  There is an old joke in medicine that you don't want to be the first to do something.  But, you also don't want to be the last.
As educators, we have a responsibility to be second or third.  We need to be early adopters and try out new ways of taking care of patients especially when the literature shows some support.  We need to take what others have done and reproduce it, testing it with our learners and demonstrating that science constantly changes.  Even more, we need to measure our results and disseminate them with time.  Only then can we advance the care of our patients.
Take the Ottawa Protocol, for example.  I've used it for 4 patients now with a 75% success rate.  To be fair, I haven't sent the patients home.  We don't have the most reliable outpatient followup.  That being said I've managed to admit patients to beds without the need to advanced monitoring since they didn't need vaso-active drips and have kept them off of the nastiest of nasty drugs, warfarin.
And that is only one example of a countless list.  The last 2 decades have shed light on the failure of medicine to adopt treatments that benefit society.  We have become far more capable of creating knowledge than using it.  Perhaps our fear of leaving the herd is partially responsible for this failure.
So lets change it.  Let's take the time to venture outward, leading the herd.  Let's generate knowledge and take time to test it, apply it, and teach it.
What of the risks?  Remember, when you lead the herd, you don't need to outrun the fastest lion, only the slowest gazelle.  You're never alone out there!
Posted by Unknown at 9:43 AM 7 comments:

Email ThisBlogThis!Share to TwitterShare to FacebookShare to Pinterest
Labels: rant

The Academic Practice of Wilderness Medicine? 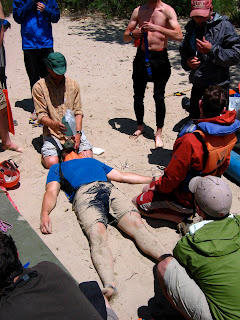 The recent Society for Academic Emergency Medicine Annual Meeting just concluded after several fun and learning filled days in Boston.  I was fortunate to be able to attend and learn from the best and the brightest.

One of the presentations that stands out in my mind was a panel discussion about the "Academic Practice of Wilderness Medicine."  Wilderness medicine probably got me into medicine to begin with.  In my teen years, I was a member of a Venture Crew and spent many hours learning to climb, kayak, and haul a pack.  Our leader was a former paramedic and encouraged several of us to pursue training as EMTs to be better prepared for handling emergencies in the outdoors.  Thus began my love of emergency and wilderness medicine.

Being in a community academic site, I've always put wilderness medicine onto the back burner thinking that I didn't have the skills or resources enough to make it into a viable niche.  This presentation, given by Sanjay Gupta, N. Stuart Harris, and Michael Millin, was a nice summary of the growing field and has rekindled my interest in wilderness medicine.

First, what is wilderness medicine?

At its most basic, it is the practice of medicine in austere environments.  While generally thought to represent the out-of-doors, this can encompass military settings, event medicine, disasters, and other less than ideal settings.

How do you start in wilderness medicine?

There are many ways to get started.  As an academic, we're always looking to cement our niche.  Probably the most basic way to do this is training.  Fellowships now exist in many places that are dedicated to wilderness medicine or wilderness medicine and EMS.  For those who have already graduated, there are any number of courses, seminars, and experiences available to build your expertise.  The Wilderness Medical Society even has a fellowship track for physicians to demonstrate a level of expertise within the field.

But what makes it Academic?

Here is where the presentation got interesting.  I've always thought of academic practice within this field as being research based; high altitude medicine, tropical diseases, etc.  Like many academic pursuits, there is so much more to practicing wilderness medicine.  You can, for example:


At SAEM, we became a fully fledged interest group at the meeting.  We even were able to head to the nearby quarry for an afternoon of learning the basics of high angle rescue.  The excitement on the participants faces as they took that first uncertain step into the air during their rappel was a priceless reminder of why I love teaching and emergency medicine.

Having had my assumptions challenged and realizing that there are opportunities for developing an academic niche in wilderness medicine even at a community site, you can expect to see more on various topics related to Wilderness Medicine in the future!

I would like to thank N. Stuart Harris for his leadership over the last year, his vision to start the interest group, and his willingness to share his rope, local crag, and experience with us this past week.
Posted by Unknown at 9:19 AM 2 comments:

What do you see when you look at a bell curve? In a perfect distribution, there are a lot of numbers under the bell and very few at the edges. When looking at clinical performance, we all want to be on the leading edge of the curve. This blog is dedicated to the pursuit of that leading edge: the positive deviant. Join me as we explore topics related to becoming a better academician, running a better emergency department, making emergency care safer, and becoming a leading force for change.